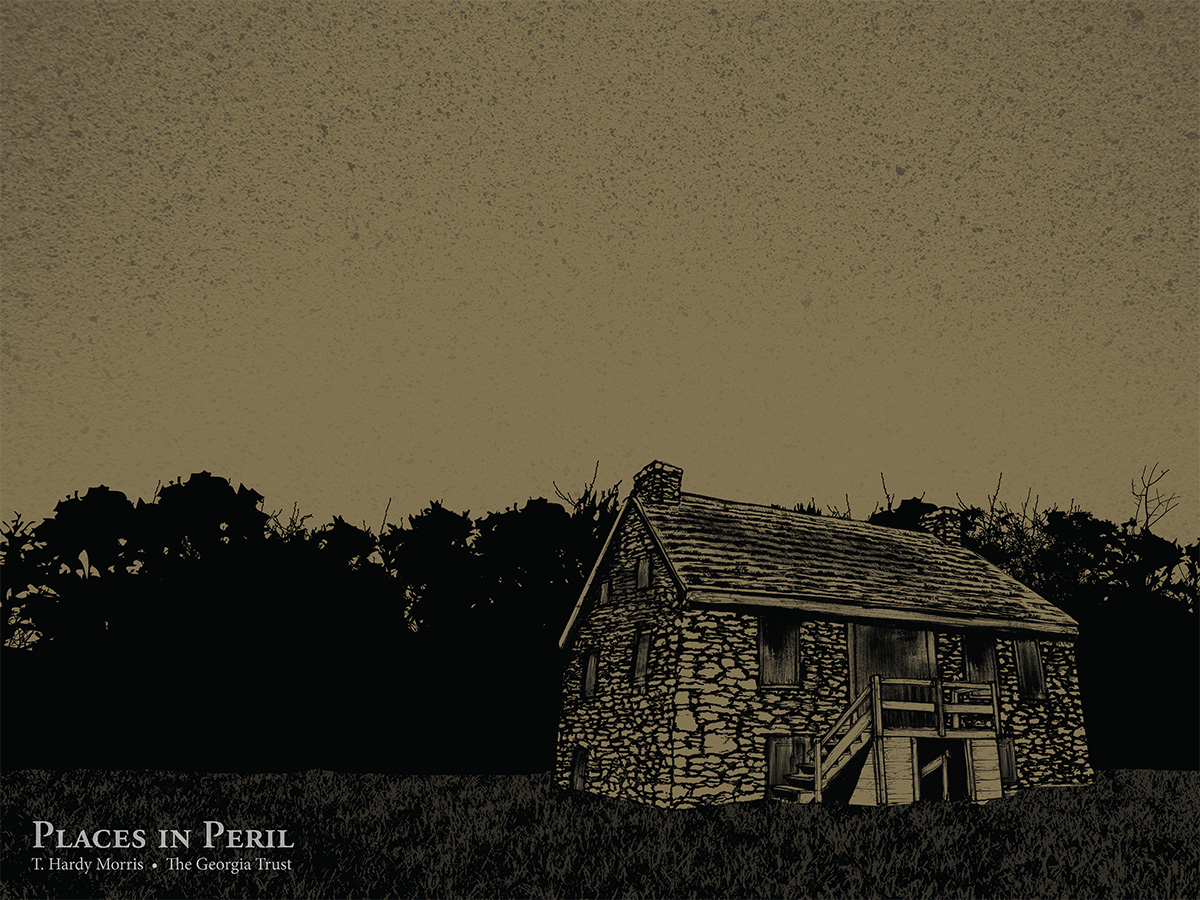 This limited edition, screen printed poster was designed and illustrated by me as part of the T. Hardy Morris Live at the Georgia Theatre album packaging. This project was commissioned by Dangerbird Records (Los Angeles, CA) and Colortest Merchandising (Athens, GA) and printed by Ruby Sue Graphics (Athens, GA).

This poster was included with the album and a t-shirt for those who bought the deluxe edition of his live solo recording at the Georgia Theatre. To get a better look at the album cover or learn more click here.

The direction of the poster was influenced by the "Places in Peril" series of music videos by T. Hardy Morris and filmmaker Jordan Thrasher as reported here by online music publication Aquarium Drunkard.

"Inspired by The Georgia Trust For Historic Preservation’s annual Places In Peril list, T. Hardy Morris and filmmaker Jason Thrasher traveled to historic sites in Georgia threatened by demolition and neglect. Ten live performances were captured at each location — one for each track from Morris’s forthcoming debut solo album, Audition Tapes". -Aquarium Drunkard

This poster focuses on the site known as the "Rock House." You can see the corresponding music video for this location by clicking on this Youtube Link.

The following description of the Rock House is from the annotations section of that music video, released by Dangerbird Records.

"ABOUT PLACES IN PERIL
Inspired by The Georgia Trust For Historic Preservation's annual "Places In Peril" list musician T. Hardy Morris and filmmaker Jason Thrasher traveled to historic sites in Georgia threatened by demolition and neglect to film live performance videos of each song on his debut solo album, "Audition Tapes."

ABOUT THE ROCK HOUSE
Story/significance: This two-story 1780s house is constructed of 24-inch-thick field stones and is recognized as the oldest surviving stone house in Georgia. The house was constructed by the Ansley family who received the land in 1783, fifteen years after the town of Wrightsborough was founded as the southernmost settlement of Quakers in America. The house remained privately owned until 1966, when the Wrightsborough Quaker Community Foundation purchased and restored the house with the intention of using it as a museum."

To learn more about the "Places in Peril" project, click here to visit T. Hardy Morris' website page about the project.